He sat there, staring into the big cat’s green eyes. The cat stared back, each of them waiting for the other to make a move. Tommy remembered how his house cat tortured the mice in the backyard, and now he knew how the mice must have felt. Not knowing what to do, Tommy let out a ‘meow’.

This confused the large animal, who remained staring at Tommy. By repeating ‘meow’ and slowly backing up, Tommy was able to escape the cougar’s reach. He knew that one swipe from that massive paw, and he would be as good as dead. The large cat certainly had the advantage, as it was dark in the tunnel and he could easily see whatever Tommy was doing. Tommy wasn’t so lucky.

Tommy lost his footing on the slick ground beneath him. Suddenly the cat pounced. Tommy found himself under the 100 lb. monster, helpless and unable to escape. The cat began to toy with Tommy, swatting him with his paw and pushing him side to side with its nose. Like the housecat, the cougar then pretended to ignore its prey, waiting for him to try an escape. Tommy remembered his housecat do the same thing.

Only he didn’t move. He played dead. Tommy was fortunate that the cat only wanted to play and wasn’t hungry. Eventually, the cat got bored and moved on.

Tommy quickly backed out of the tunnel and headed home. When he arrived, his mother was waiting for him. “Tommy, guess what? We just adopted a little kitten for you.” she said.

This is my entry into this week’s Sunday Photo Fiction.  Click this link for more stories, or to add your own story. CLICK HERE

Grey Eagle was a warrior

at least he was in his dreams.

many battles under his belt.

Grey Eagle would not know this,

it was not part of the Government’s plan.

when he was but a boy.

They would teach him a better way

away from the people he loved

and they had no say.

and taught him the ways of the white man

because they thought he was a savage.

His lessons were beat into him

with a whip and a leather belt

He missed his brothers and sisters

and his mom and his dad

and the people in his life who were most important.

They took away his heritage

and his culture and most of all,

they took away his hope.

nothing but a drunk and a joke.

when he closes his eyes

he soars high above us

where he is free

This is my entry into this week’s Sunday Photo Fiction

I have been building walls all my life. My reasons at the time were unknown, but now I know. It’s all about self preservation. Don’t let anyone in, nobody gets hurt. Great plan. At least I thought it was a great plan.

Why face a problem when you can run in the opposite direction? The world has enough problems, why add to them? That’s why I built the walls. Twenty years of wall building and I thought I was pretty safe. Who wouldn’t?

My plan grew a snag when she came along. She wouldn’t let me push back. Don’t worry, I am still trying, especially whenever a challenge comes along, but she is strong, and she pushes right back.

She came along and showed me a different way. Instead of running in the opposite direction, she taught me to run at the problem head on. This new knowledge has allowed me to achieve so much. It has allowed me to be here right now. It allows me to share the secret with you.

Tearing the walls down was as much work as it was building them in the first place. Brick by brick, she helped me tear the walls down. You know what? The view out here is a whole lot better now that I can see the light.

This little piece of self examination is brought to you courtesy of Sunday Photo Fiction. 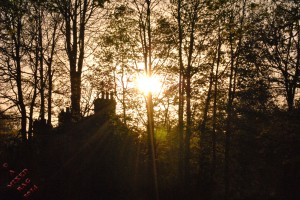 Billy Chanting spent his entire life trying to get to Heaven, and for that, he spent most of his days in hell. You see, Billy dealt with schizophrenia for most of his adult life. He heard ‘voices’ that told him to do terrible things, and thinking it was the blessed Lord’s voice, he listened. Maybe that was the reason why he spent the last few years of his life behind bars, mostly in solitary confinement.

His rap sheet was endless; in his thirty years of life, he took so many. He murdered small children, pregnant mothers, and even a priest or two, all claiming to be upon the orders of God himself. He said that the children were spawns of the devil, and he had to rid the world of them before they grew and spread evil throughout. He claimed that the three pregnant mothers were to give birth to the anti-Christ, so he took their lives before they could do so. The priests he killed were apparently spreading blasphemy across the world.

One fateful day, when his sentence finally came to an end, Billy Chanting was set free.  When they opened the doors of the prison, Billy finally seen the light, and headed directly into its direction. “God, take me. I have lived my life doing your bidding. I am ready” he said.

Trouble was, the ‘light’ he seen wasn’t the light of God, but instead, the lights of a prison bus. He was killed instantly, with a huge smile on his face.

The story of good and evil is my entry into this week’s Sunday Photo Fiction.

Earlier today my wife mentioned how she would like to be able to write like I do. She was amazed that I could look at a picture and come up with a story so quickly.

I felt that this would be a good time to get her  input. I asked her to take a long look at the picture prompt and tell me what she saw. I added that I would then try to write a story based on what she seen. I should have thought this through before offering.

When she looked at the picture, she said that she seen a penis, a knife, and a hummingbird. I know, my work would be cut out for me.

This is my entry into this week’s Sunday Photo Fiction.

There once was a little hummingbird named Percy. Percy looked exactly like his friends except for the fact that he had a giant penis. Having a giant penis made it very difficult to fly, and because of this, Percy was often the butt of everyone’s jokes. When he couldn’t take the teasing any longer,  he made up his mind to cut the damn thing off.

He was very scared about doing such a thing to his giant penis, but on one freezing cold day, he got up the nerve to do it. Unfortunately for Percy, it had began to rain the same instant that he cut the thing off. The rain turned to ice, and Percy, the knife, and his giant penis froze to the fence.