This Christmas was going to be the best one on a long time. Emma ordered each of her eleven children a Christmas gift from the Sears-Robuck catalogue. Jack was working at the time, and for the first Christmas in a long time, the Blanchard family of Codroy Valley Newfoundland would have enough money to buy gifts for all their children, even the older ones.

That was, however, until Jack lost his job. What a time to lose a job, right before Christmas. The worst thing was the big order Emma made. How was she going to pay for all those gifts? This year it looked as if Santa wouldn’t be making a stop at their house.

Jack, ever the optimist, believed that no matter what, the family would still have Christmas, and he proved it by hiking to the post office, which was miles away from their little farm house.

When he arrived at the post office, he was surprised to find a letter addressed to Emma. He ripped the envelope open only to find a check for $20, enough to pay for all the Christmas gifts. Turns out, Emma’s sister Elizabeth, who lived in Nova Scotia,  won the money at a Bingo game, and decided to send it to her younger Sister.

The entire family, especially Emma, was surprised when, on Christmas morning, all the gifts she ordered sat beneath the Christmas tree.

My mom told this story during our Christmas meal yesterday. It is truly a gift to hear such amazing stories from the people who lived them. Merry Christmas to all my blogger friends. 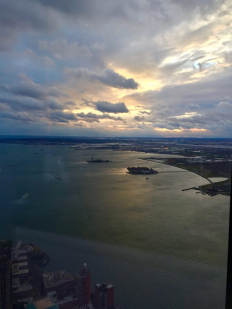 “I know how calm the waters are, but just look at the sky. A storm’s a’ comin’ I tell you!” Warned the old ‘Salt’.

Ignoring his advice, his crew boarded the small fishing vessel and headed out.

Well, the rumors were right, the fish were plentiful, probably the most cod in quite some time.

Heading back to shore, the winds began to pick up. The tides were rough, and the tiny vessel swooped from one side to the other, until the boat capsized.

“Hate being right” he said, as he and five other fishermen carried the casket to the church.

Many of my mom’s family were mariners who fished off the coasts of Newfoundland and Nova Scotia. We lost so many, mostly through poor decisions and rough waters. This little story is my tribute to the men who lost their lives at sea; and my entry into this week’s Friday Fictioneers

Silas Hunt was a contrary old man who lived alone in an old house the kids claim is haunted. Silas almost never leaves the place, it is his sanctuary.

“Kids these days, they don’t even understand Christmas” he grumbled, while on a rare excursion to the grocery store.

He grumbled all the way home, mostly about the children  in the playground near his home.

One of the kids, a small blonde girl, approached the old man. Noticing his long grey beard and ample belly, she asked  “Are you Santa?”

Upon arriving home, he stamped his feet on the step, hauled the door open, and slammed it behind him.

The creaky old floorboards sounded as he scuffed along to the bedroom. A loud squeak came from the bedroom door, as Silas entered the room.

Inside the bedroom, the walls were adorned with pictures of a man, his wife and a crowd of children. Surely the man in the picture cannot be Silas, he hates kids, everyone knows that.

As Silas lay in the bed, he drifted off to sleep.

“Dad, what are you making?” asked a small child, his britches patched and worn.

“Never you mind, young one. Go ask mom what she has on for supper.” said the father.

“Daddy, can I have a pony for Christmas? I promise to feed it” said Suzie, the youngest child.

“Ask Santa, maybe he will bring you a toy pony.” her father said.

A loud knock on the door startled Silas. Half asleep, he sprang to his feet and headed for the front door.

Peeking out through the window,  Silas seen her.

It was the little girl from the playground. Her clothes looked tattered, her shoes torn and ripped. There was something about this little girl that scared Silas.

“Oh My God, she looks just like my Suzie” he thought. He ran back upstairs, tears running down his wrinkled face.

“Go away, you are dead! Go away and don’t come back, ever!” he pleaded. The knocking persisted. “Santa, are you Santa?” “Let me in, Santa” “Let me in, Daddy” she hollered.

Silas ran to the door and hauled it open. There was nobody there. There wasn’t even any footprints in the snow. He imagined the entire thing.

That night, Silas sat in the old rocking chair in the kitchen. In his hands, he held a family picture. Vivid memories filled his head, mostly of a happier time when his family were with him, and of Christmas. He remembered making toys for the small ones, while the older ones helped their mother prepare Christmas dinner. He remembered her too, her soft hands holding his, the two of them planning to spend forever together. He remembered all the good things, and sadly, he remembered the bad.

He thought of that horrible day. It was Christmas Eve when Mary decided to take the kids to the store to shop for their father’s gift. It was going to be a surprise, so nobody told him they were leaving. The roads were slick that day, too slippery for a good driver to stop, let alone a drunk driver.

They say they didn’t suffer. The doctors tried everything, but couldn’t even save one of them. Five children and his beautiful wife Mary, all dead. The driver? He walked away without a bruise. He was the Shopping Mall Santa, out for a few drinks before spending his day bringing Christmas cheer to the little ones.

Sadly, Christmas is not always a happy time for most people, especially seniors. This Holiday Season, try to remember those who have trouble celebrating the birth of Christ; and for the Love of God, Don’t drink and drive. Merry Christmas to all who read this, my Christmas story for 2016.