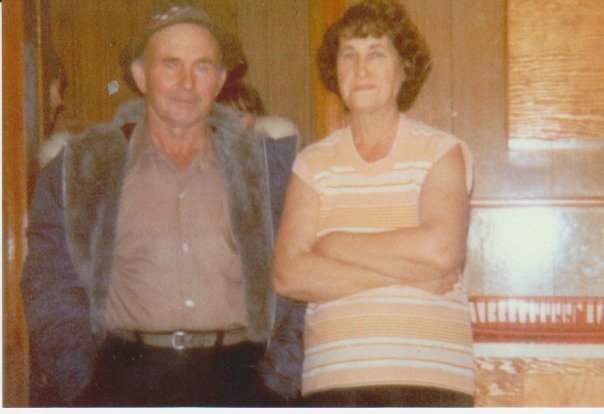 My mom called on Thursday to talk a little about her experiences with her mother in law. She said that Gram was the most loving, fun person she had ever met. Mom spoke about the times when my grandmother invited everyone to her house. She would cook up a big pot of homemade beans, and along with her delicious home made bread, she fed everyone who attended her parties. She would make sure that she invited all the local talent, and with squeezeboxes, guitars, fiddles and more playing traditional tunes, my grandmother would get up and step dance to every song.

Mom said that gram was a very energetic woman who always found the good in everything and everyone. Mom recalled one occasion where she, my dad and my grandmother traveled many miles in the back country to pick bake-apples (a local berry that grown in abundance here on the island) . They were in the middle of the bog when a thunder and lightning storm broke out. In the pouring rain, mom and dad ran for cover, only to find my grandmother on her knees, laughing to kill herself at the two of them, as they ran in circles looking to take cover.

Mom remarked at how she had met Gram. My aunt Joan was getting married, and being my mom’s older sister, she asked my mom to stand up for her at the wedding.  Mom still remembers the tall lady who came over and welcomed her into the family. The wedding was one that was remembered for quite some time, as my grandmother catered the entire event herself, complete with lavish meals made from fresh vegetables from her garden and steak from the many cattle they raised on their farm. My grandmother was quite the lady.

My mom commented on how intelligent my grandmother was. She could cook anything, she made clothes for all her eleven children, she had gardens that reaped only the best vegetables and fruit, she even spun her own wool, and knitted winter clothing for not only her children, but for my grandfather and many of the people in the community as well. And she did it with love.

My dad has been devastated by the damages caused to his mother by Dementia. Since contracting the disease, my grandmother has even forgotten who my dad was on several occasions, and this cut deep for my father. My dad is not one who discusses his feelings often, so when he admits that he is hurting, it affects us all. The positive thing here is that my grandmother is now at rest, and hopefully in the loving arms of my grandfather once more.

On Friday evening, all the family were called up. Gram’s condition worsened.  She had stopped eating and was simply living on a few fluids that were administered to her by a nurse. When dad entered the room, Gram raised her arm as to signal him to come over. With that, she held my dad in her arms, uttering “My baby, be with me”

On Saturday night, my dad spent the night next to his mother. She experienced trouble breathing all night, and although he felt helpless, he remained by her side, along with his many siblings.

On Sunday afternoon, exhausted from the effects of the disease that stole her from us, my grandmother closed her eyes, and peacefully, she left this world.

I visited her home that afternoon, while she lay still in her bed. I paid my respects to the kindest person I have ever known. When I got home, tears fell as I thought about all the good things and lessons I was taught by my grandmother. This minute, my grandmother is happy, and by the side of her faithful husband, Teddy. This is where my grandmother prayed to be ever since my grandfather passed away.

7 thoughts on “Rest in Peace My Lovely Grandmother”