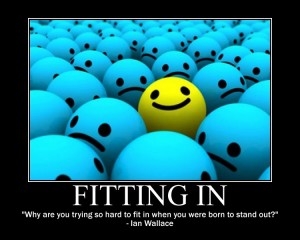 Gordon was a kid not unlike many kids. A known underachiever before the term ‘Underachiever’ was even coined, he struggled in a world of successful kids. Well, maybe not successful, but confident.

Gordon was happy getting a fifty in a test, or a forty even. He never played baseball with the other kids, like his seven other siblings did, he was never a very good at anything, or so he thought.

Gordon was an overweight kid growing up in a large household with an alcoholic father and a mother who put up with it. His sisters were successful in school and even more successful when they were out of school. His older brother, a known bully in the community where we lived gave Gordon a hard time whenever he could, and his younger brother showed him up in all his tests in school, getting high grades and even honors.

Poor old underachieving Gordon, who, on one day, decided to change things forever. I remember him calling his friends together for a trip downtown, which Gordon NEVER done before. Hell, we didn’t realize that he had friends, as once school was out, he would get on the bus, and purposely sit up by the bus driver, away from the rest of the students, or at least the cool students.

Anyway, that day (the little community in which I grew up in will always remember that day), he got his friends and school mates to go down town. They went to the pizza house where he treated them to subs and pizzas. They went to the mall and hung out for awhile, and then they went to the old Harmon Theater where they all watched a Batman movie (the old ones with Adam West and Burt Ward) and when they finally got home, nobody heard from Gordon again.

That evening, when he got home, he went straight to bed, with his fathers shot gun, and left a mark on his bedroom wall, a mark on his parent’s hearts, and a mark on a little community who had never lost one so young, so mixed up, and so troubled.

Gordon tried his whole short life (all sixteen years of it), and then gave up, but not until he had one day in which he didn’t care about being overweight, being the butt of everyone’s cruel jokes, being the black sheep of his family, and being overly confused with everything in this world in which we lived, and which he struggled.

Some thirty years after this horrible incident, Gordon’s parents are still reeling from that night, but moreover they are reeling because they never noticed him reaching out for help.

For one short minute, or even one short second, Gordon had all the answers. For once, he was a slim, successful kid who stood up to bullies, who got good grades, and who was the envy of everyone, and then it was gone.

This post is for all the confused kids and adults out there who think they have found the answer. This is not the answer, talking about the issue is the answer. There are people out there who want to help, want to listen, and want to save you from making a decision to end your life before you do it, and give you answers.

One thought on “Gordon”